I'm overjoyed to relate that my new novella, The Imperishable Sacraments, has just been released by Ex Occidente Press as Vol. IV of the L'Homme Recent series.

The book, which is lavishly designed throughout, is graced with the artwork of none other than Charles Schneider. Besides the dust jacket and frontispiece illustrations, the book features three fold-out images on thick paper.

The book can be ordered from Ziesings Books in the USA, and Fantastic Literature or Cold Tonnage in the UK. 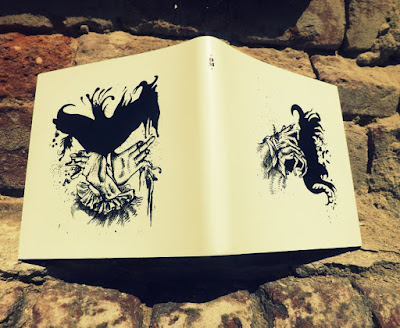 “This is the night of which it is written: The night shall be as bright as day.”

An altar is erected in a neglected quarter of the city, concealed from prying eyes. Simone, bibliophile and aesthete, arranges a series of unlikely relics as an offering to the unknown, to mystery, to the ghosts of lost and forgotten literary works. A pair of ceramic hands, cracked and tainted, share space with a cup of seawater, a small black book, a silver key. Later, she returns to find that the elements upon the altar have been tampered with, the book has been exchanged for another, the key is not the same as the one which had been left there. Simone takes the mysterious objects into her possession, unwittingly falling under the influence of ancient and imperishable hands. She is henceforth plunged into the territory between lucid sleep and insomnia, drawn inexorably toward a house concealed by treacherous winds, conveyed along a hallucinatory route to a meeting with a dignitary of no uncertain grandeur and distinction, there to partake of a sacrament forgotten to history and theology alike.

Keys to gates celestial and infernal lie ever in our midst - they are ignored, denounced, explained away by rhetoric. St. Peter's hands no longer clasp the keys to the kingdom, despite the promises of those who would claim dominion over them. They have been scattered far and wide, dispersed like funerary ashes by the winds of time and negligence. Tradition holds that one key loosens while the other binds. It has even been asserted the one was forged in the fires of heaven while the other was produced in the furnaces of the damned. But who, in these times of nihilism and malaise, is possessed of the expertise necessary to discern between the two?

The book is limited to 85 numbered exemplars only.

Posted by Damian Murphy at 1:24 PM