The Exaltation of the Minotaur

I am ecstatic in every conceivable way to announce The Exaltation of the Minotaur, a new collection that has just been released on Mount Abraxas, the latest imprint to emerge from the perilous heights and sublime depths of Ex Occidente in Bucharest. 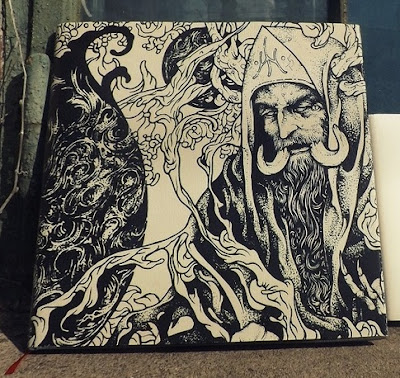 By complex rites and protocols both infernal and divine, by fervent prayer and countless sleepless nights, by the recitation of venerable hymns, by subtle blasphemies, by outright lies, by mirrors placed at inconspicuous angles, by the provocation of destiny and by the steady application of blind luck may the contentious beast of Knossos be exalted. Care must be taken, precaution must be observed, for the process, once begun, is irreversible. When the heights of exaltation have been reached, heaven itself cannot contain the beast. The ancient wine of prophecy will overflow its chosen vessels and inundate the houses of the blessed and the damned.

The Exaltation of the Minotaur is partially revealed over the course of three lengthy narratives, stories steeped in complex rites and ceremonies, oracular automatons, and the treacherous perils of diplomacy. The Ivory Sovereign follows the tangled fate of a ruined professor as he plunges ever further into the impossible depths of a carnivalesque attraction. A bureaucrat, a woman of noble descent, and two insatiable occultists are drawn into to an inexorable unveiling of the minutia of providence in An Incident in the House of Destiny. The Hieromantic Mirror reveals strategies impenetrable and obscure within the procedures and formalities of a consulate.

This exquisitely designed and packaged volume, featuring fully illustrated dust-jacket and frontispiece by Rotten Fantom, is currently available for pre-order from Cold Tonnage in the UK, and will soon be available from Fantastic Literature Ltd. in the UK and Ziesing Books in the US.

The Exaltation of the Minotaur is limited to 83 hand-numbered exemplars only.
Posted by Damian Murphy at 12:00 PM