All is Full of Hell 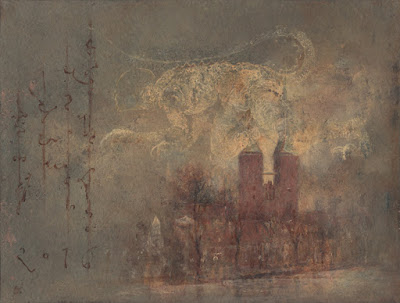 
I am extremely pleased to announced the imminent release of ALL IS FULL OF HELL : A Panegyric for William Blake, an homage to the unceasing labours of the eternal poet, a tribute to Albion’s angel as he burns beside the Stone of Night, a lamp left flaming on the altar for the unfading Queen of Heaven, and a testament to the radiant ichor of the prophets and the heretics.

The book is edited by D.T. Ghetu and myself, is lavishly illustrated by Denis Forkas Kostromitin, and will be released on the Mount Abraxas imprint of Ex Occidente Press very soon.

Trefoil is the Grail of Perdition by Sebastian Montesi​​​
​​The Kings of Cobweb and Dandelion by Colin Insole​
Feast of Fire by Alcebiades Diniz Migue​l​
​​Ghost of a Flea by Rhys Hugh​​es​
​Shadow of Horror risen in Eternity by Stephan Friedman
Great, Pale World by D.P. Watt
​Horrox ​​by Andrew Condous
​​The Secret Wound in Life by Joseph Dawson​​​
Burnt the Fire of Thine Eyes by Oliver Smith
King Mob by Philip Fracassi
La Fleur Infernale by Leopold Nacht
The Torso in Shadow by Adam S. Cantwell
I Want! I Want! by Henry Jovial
Christian Singles by Thomas Phillips
Wollstonecraft by Karim Ghahwagi​
​​​The Golden Mile by John Howard​
​​Nocturnal Gardens by​ Ramon Lasalle​
The Living Rapture by Jonathan Wood​
​Synarchy of Molten Bones by Deathspell Omega

Copies can be reserved with Ziesing Books in the US by emailing info@ziesings.com, and with Fantastic Literature and Cold Tonnage in the UK. For more info, email exoccidente@gmail.com.
Posted by Damian Murphy at 6:24 PM